It was such a long and excruciating wait for The Walking Dead fans since Negan bashed the skull of a member of Rick’s group and shocked everyone. During the summer, although there were many petitions and rants by the fans, AMC did not reveal who was killed during the final scene of season 6. That was of course a commercial move and it was a good one at that considering the series just had the second highest ratings with this episode.

The episode telling us who Negan actually killed did not only do that but put  things in another perspective in addition to shaking all of us a lot more considering Negan (SPOILERS HERE) killed not one but two of the group and it was heartbreaking for us to see them gone in that way. Those emotional “last words” did not also help.

You may ask “Which  episode had the highest ratings so far? Which one did better than this one?” Well, it is the premiere of season 5 which saw Carol saving the group from the cannibal sanctuary of Terminus. That episode had 17.29 million viewers in total and the premiere of the seventh season, “The Day Will Come When You Won’t Be” had slightly less than that, 17.03 million viewers to be exact.

Just like you all reading this, we are also excited to see what the rest of the season will bring. Follow us on Facebook if you’d like to get stories and news on time! 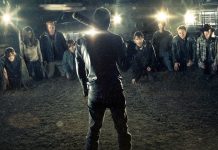