Let the Right One In focuses on the story of Oskar (Kare Hedebrant), a 12-year-old kid with divorced parents who is abused by the bullies around him. Then comes a mysterious little girl, Eli (Lina Leandersson) and things change. That is because Eli is an immortal vampire although she looks like a kid. She needs to feed on the living in order to survive. Oskar gets along well with Eli and Eli protects him from everyone.

As you might already know, TNT ordered a pilot for the TV adaptation of Let the Right One In. This is the second attempt to bring the franchise to the States. Matt Reeves directed the first one, the moive in 2010 named Let Me In  with Chloe Grace Moretz as the lead.  TNT announced they cast Norwegian model and actress Kristine Froseth as their lead for the role of Eli. It seems like there are more casting news.

Deadline reports that TNT cast the actor for the role of Oskar, Benjamin Wadsworth will be playing the role. The other male lead cast for the show is Thomas Kretschmann who will play Inspector Eriksson, a detective who followed the body trail Eli left from Europe to America. 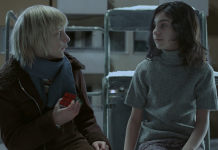 Let the Right One In

Let the Right One in is Coming to TV