Although Lethal  Weapon TV series had some challenges in front of it, we might very well say that it overcame all of these. The series had a strong start with being the highest rated FOX Drama in two years and the third TV series with the highest rating this fall. Seems like Clayne Crawford and Damon Wayans have a good chemistry between them that will carry the show over.

First order regarding Lethal Weapon was for 13 episodes, FOX must have seen the things we are seeing also, because it just ordered a full season of Lethal Weapon.

The network released a press statement saying they expanded the first season of the police drama to 18 episodes from original 13. President of Entertainment David Madden made the following statement regarding their decision:

Lethal Weapon delivers an explosive and wildly entertaining core relationship between two cops, with dynamic performances by Damon Wayans and Clayne Crawford, surrounded by cinematic action, endearing humor and true heart. [Series developer] Matt Miller, [director] McG, [and executive producers] Dan Lin and Jennifer Gwartz have done a tremendous job on this show, which has proven to be a self-starter and solid companion for EMPIRE. We are thrilled to add these episodes to Lethal Weapon’s first season. 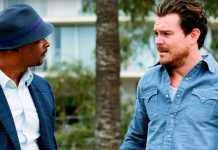 Lethal Weapon is Coming to TV