Lethal Weapon is coming to TV if you still have not heard about it.

FOX has a lot to do to do justice for one of the most popular cop duos in the history of silver screen.

The story of the duo will take start right after Murtaugh celebrates his 50th birthday. Executive Matt Miller stated that the character would have two teenage kid and a newborn baby – during the birth of which he would have had a heart attack and he would be about to return to duty after a break to receover.

Wayans said about his character “He cheated death, and he got another chance at life. It told him, ‘You gotta slow down,'” .

The other half of the duo, Riggs will also be having some topugh times himself. Crawford said “He loses his wife and unborn child in a fatal accident,” about his character in the show and added  “It kind of flips his world upside down. I think he starts to climb out of that hole somewhat by distracting himself with the only thing he knows and understands, which is catching bad guys.”

Lethal Weapon’s TV show version will also include Keesha Sharp, Jordana Brewster and Kevin Rahm in its cast and it will premiere on September 21st, 2016 on FOX. 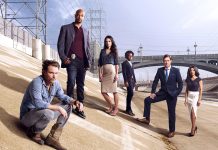