Netflix and Marvel Cinematic Universe have a great relationship working to a great deal of profit for both parties. With The Defenders and Iron Fist series coming in 2017 and Luke Cage debuting this fall, the two giants are going to please a lot of comic book fans.

Iron Fist is one of the most extraordinary superheroes of the Marvel Cinematic Universe that deals with Netflix. The protagonist, Danny Rand (Finn Jones) is orphaned in an accident in China and was raised in the alternate-dimension city of K’un Lun. He can channel his chi to collect superhuman power in his body. It looks like Netflix version of Iron Fist will delve into the training and mysticism that helped shaping the superhero.

We are probably going to see Rand’s training with Lei-Kung, his mentor in K’un Lun. In the comic books, Lei-Kung perpared young fighters to be the protector of the city, namely Iron Fist.

Finn Jones (Game of Thrones’ Loras Tyrell) said that he underwent an intensive training regimen  involving martial arts disciplines, meditation and Buddhist philosophy and added “I’ve always dreamed of a role that bridged spiritual discipline and badass superhero,”. If the figthing scenes is going to be anything near Daredevil, well, it will be a pleasure to watch Danny Rand. 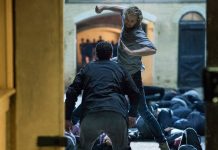