It is time for some celebration if you are a fan of Netflix’s new series Stranger Things ! The network just announced they renewed the series for the second season.

Stranger Things will return to Netflix in 2017 with 9 episodes – which is one more episode than the first season. Netflix also shared a video with the Season 2 episode titles of Stranger Things which include “Madmax,” “The Boy Who Came Back to Life,” and “The Lost Brother.” You can also see that the video is confirming Season 2 to be set in 1984:

Creators the Duffer Brothers will continue to executive-produce. No official word yet on who from the cast will return, though Shannon Purser, who played Barb on Season 1, is probably out, as she was just cast in the CW drama Riverdale.

Duffer Brothers will carry on their jobs aas executive producers while there are no news for which members of the cast will return. Barb (Shannon  Purser) probably will not since she was cast in CW’s new drama Riverdale and well (SPOILER) things did not go well for her in the 1st season.

The Duffer Brothers shared some details with EW stating that core cast will return and four more characters will be added to the cast. What happened to Eleven (Millie Bobby Brown) will remain a mystery at the first few episodes according to Ross Duffer’s statement. 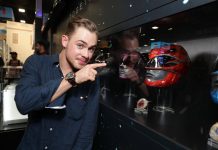