While there is a lot of speculation around Ryan Lochte‘s possible apperance in this season of Dancing with the Stars, there are some other casting news that fans might like.

Dancer siblings Derek Hough and Julianne Hough will return to Dancing  with the Stars this season. While Derek will be back as a dancer Julianne will return as a judge.

No comments were made by ABC when it was asked.

As you well know, Derek Hough won the Mirrorball trophy last season while competing against Bindi Irwin and this will be his 7th attempt at the trophy. He will also star as Corny Collins in Hairspray Live! by NBC this year.

Julianne Hough, on the other hand, will be judging for the fourth time while she has won the competition twice as a dancer. Other judges who will be back are Carrie Ann Inaba and Bruno Tonioli.

While two other members, Amber Rose and Ryan Lochte  were reported, the cast of Dancing with the Stars’ Season 23 will be announced Tuesday by ABC. 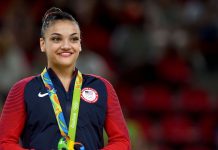 Dancing with the Stars

Dancing with the Stars Casts Another Olympian