Hernandez will have to work hard  to fill the shoes of the last Olympic gymnast who competed on Dancing with the Star.  It was Shawn Johnson who actually won  the Mirror Ball trophy in the 8th season. Coming back to the show in 2012 for an all-star season, she was the second behind Melissa Rycroft. 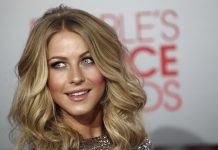 Dancing with the Stars

Julianne and Derek Hough Coming Back to Dancing with the Stars