We will be able to see Luke Cage, Marvel’s third Netflix property, soon while the fourth and the fifth are on the way to show up in 2017, Iron Fist and The Defenders, respectively. The Defenders is a group of heroes brought together by no one other than Dr. Strange himself.

The structure of The Defenders team is flexible as heroes for the team are picked for the mission at hand in the comic books, at the very least. These heroes are choosen among many from Marvel’s large spectrum. This is what makes The Defenders different from The Avengers or the Fantastic Four. Another team of Marvel’s was Heroes for Hire which comprised of only Luke Cage at first until Iron Fist joined him.

Luke Cage’s showrunner Cheo Hodari Coker was asked about a possible team up between Luke and Danny Rand (Iron Fist) in the first season of Luke Cage and he answered “Now in my mind — we don’t go into Heroes for Hire in season 1 of Luke Cage — Luke Cage season 1 is ultimately about the evolution of a hero.” Coker finished his words by saying it might happen in season 2:

“In terms of Luke Cage, Netflix has to order a second season first… We’re not treating [the show] as a one-off, and I’m confident people will dig the show, but, trust me, like season 2, I’ve got a few ideas. But we really won’t get ready until Netflix sees the viewership, and hopefully the subscriptions that will come from this show, and then they’ll say, ‘Let’s get into it.’”

It will certainly be interesting to watch all of these before the second season 2 of Luke Cage so we are not worried about waiting at all. 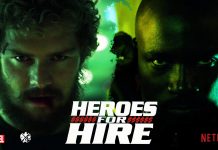