Marvel Cinematic Universe started in 2008 with the release of Iron Man and has been expanding at full speed since then with the latest big step being taken towards the small screen. The company collaborated with Netflix and reached an agreement for 4 different shows for starters. That proved to be very profitable for both sides as Daredevil, Jessica Jones and Luke Cage all had amazing ratings which made fans more interested in upcoming series and following seasons of the existing series. Iron Fist will be with us in March 2017 followed by The Defenders, a team-up series of our heroes,  Luke Cage, Jessica Jones, Daredevil/Matt Murdock and Iron Fist/Danny Rand.

This team-up, however, is not the only team-up fans are excited about. In the comic books Luke Cage and Danny Rand become best friends and comprise the team of heroes people in need call, namely Heroes for Hire.

Mike Colter, the actor playing Luke Cage, was asked many times about the possibility of such a team-up in a storyline, however, he never was positive about that as much as he was this time.

When asked about Heros for Hire during his Los Angeles Comic Con event visit, Colter made the following statement:

Finn Jones — I was just hanging out with him yesterday, so I’m going back to New York to start filming [The Defenders].We’re going to be getting ready to do Heroes for Hire eventually. We’re going to do it. 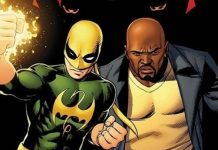 Heroes for Hire May Happen in Luke Cage