Fans of Nashville have been waiting curiously for the new season’s premiere date to be announced. Well, CMT just eased their minds.

The 5th season of Nashville will take start on January 5th, 2017 as announced by CMT on Wednesday. The new episodes will be broadcast on Hulu the next day after their original air date.

As you already know, Nashville has been cancelled by ABC earlier this year. In cooperation with Hulu, CMT  picked up and revived the country music based drama for another season. Two new showrunners, Ed Zwick and Marshall Herskovitz will have their debuts with the show this new season while also the big majority of cast will return to the show. Will Chase (Luke Wheeler) and Aubrey Peeples (Layla Grant) are the only cast members who will not be returning.

With season 4 ending with a real cliffhanger and Hayden Panettiere’s character Juliette Barnes going missing together with her plane, we are aware that fans are really looking forward to season 5 with much anticipation.

On a side note, CMT will bring a new TV show to the screens; Million Dollar Quartet. This show will be focused on the birth of rock ‘n’ roll music in Memphis during the start of the Civil Rights Movement. The show, which takes its inspiration from the related Broadway musical, will star Chad Michael Murray (One Tree Hill, Marvel’s Agent Carter) as Sam Phillips, the founder of Sun Records and Billy Gardell as Colonel Tom Parker, Elvis Presley’s manager.   Million Dollar Quartet will premiere in March while Still the King starring Joey Lauren Adams and Billy Ray Cyrus will come back to TV in the spring season. 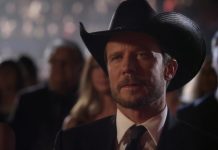 Luke Wheeler Coming Back to Nashville